Syria is witnessing the dual front situation. Both of the major cities in Syria are under forge and people are suffering in huge number. The first city is Afrin which is near Turkey and the second one is Ghouta.

Afrin is located in northern Syria and currently under pressure by Turkey. Turkey wants to capture the city of Afrin. Reason for this is that currently, it is under control of a Kurdish militia group, YPG. This group is also known as SDF, Syrian democratic force. They control 65% of North Syria-turkey border and like other Kurdish groups, are fighting for independence. SDF is funded by the USA, mostly in past. SDF is a strong ally of a terrorist group PKK, it is a group which is recognized as a terrorist militia in the vision of many countries and also in the vision of Turkey. PKK is responsible for doing terrorist activities in Turkey, particularly the region which lies near to the Syrian border. The Turkish land which is near the Syrian border is densely populated. PKK had done a damage to Turkey in past, and Turkey fears that if Afrin came completely under SDF, then PKK will take an advantage and it will be easy for them to attack Turkey. To prevent so, Turkey wants to annex Afrin. They are launching many operations to do so. Huge damage has been witnessed and many casualties are reported. According to conflict monitor Syrian Observatory for Human Rights, at least 67 civilians, including 20 children and 12 women, have been killed in 11 days of Turkey’s “Operation Olive Branch.” Another 185 have been injured. 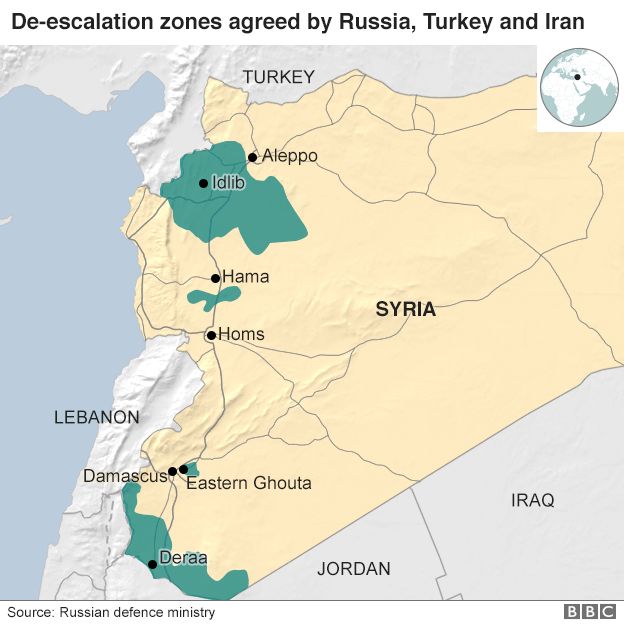 Ghouta is located near Damascus (capital of Syria) and is controlled by rebel groups since 2012 when rebel heat in Syria was at its peak. With fall of rebels and Daesh in 2018, Syrian government wants to retake Ghouta by hook or Crook. They are bombing the area and want to take it all back. Successfully, they have taken most of Ghouta but still, the densely populated area is still left where rebel terrorist is using civilians as human shields. Rebel-held Ghouta is divided into 3 pockets now. The relentless bombing had made worse for civilians which amnesty international said to be war crimes. However, 15,000 civilians have managed to flee that are and continuous aid tried to provide. Statements of civilians say that they were trying to flee that area from long ago but the terrorist rebels were not allowing them to do so. The Russian military is trying to make a passage for safe evacuation over the area. 1099 civilians have been killed in Eastern Ghouta over the past few days, according to the death toll compiled by the Syrian Observatory for Human Rights on March 11.This includes 227 children and 154 women killed.

After the fall of major cities like Raqqa, things haven’t stopped. Daesh is losing in Syria but many rebel groups are still making waves, which are deadly. Syria has become a war of numbers. More than 500,000 have been reported killed and two-thirds of the pre-war population is displaced to safer locations or in neighboring countries, leading to huge migration. Around 100,000 civilians are in prisons or misplaced. and a generation of children has faced what the UN describes as a psychological ruin. On 15th March, Syrian civil war will enter its eighth year and many reports say that this war can take further a year. Reconstruction of Syria will be a question at the top. Reconstruction of Syria can take up to 1 trillion US dollars and Will be need of huge investors.

Our thoughts and prayers go out to the families and loved ones of the brave troops lost in the helicopter crash on the Iraq-Syria border yesterday. Their sacrifice in service to our country will never be forgotten.